Here are some significant features of the interface and its implementation:

All Java values and object references which are passed between Prolog engines and Java VMs via JPL’s Prolog API are seen as instances of types within this simplified JPL type system:

Instances of JPL types are represented within Prolog as follows:

The Prolog API allows Prolog applications to inspect, manipulate, and reason about the types of Java values, references, methods etc., and this section describes how these types themselves are represented. Predicates which pass these type representations include (the clue is in the name):

The pseudo-type void is represented by this atom:

The pseudo-type null is represented by this atom:

The primitive types are represented by these atoms:

This structured notation for Java types is a term-encoding, designed to be convenient for composition and decomposition by unification.

The descriptor notation for Java types is one of two textual notations employed by the JVM and the Java class libraries; JPL (necessarily) supports both (and supports conversion between all three representations).

The classname notation for Java types is the other textual notation employed by the JVM and the Java class libraries. It is a (seemingly unnecessary) variation on the descriptor notation, used by a few JNI routines. It has the slight advantage that, in the case of simple class types only, it resembles the Java source text notation for classes. This representation is supported only because certain JNI functions use it; it is used within JPL’s implementation of jpl_call/4 etc. You may encounter this notation when tracing JPL activity, but otherwise you need not know about it.

To create an instance of a Java class from within Prolog, call jpl_new(+Class, +Params, -JRef) with a classname, a list of actual parameters for the constructor, and a variable to be bound to the new reference, e.g.

NB for convenience, this predicate is overloaded: Class can also be a class type in structured notation, e.g. array(boolean).

The object reference generated by the jpl_new/3 call (above) can be passed to other JPL API predicates such as:

which calls the setVisible() method of the object to which JRef refers, effectively passing it the Java value true.

(This call should display the new JFrame in the top left corner of the desktop.)

Note the anonymous variable passed as the fourth argument to jpl_call/4. A variable in this position receives the result of the method call: either a value or a reference.

Since SetVisible() is a void method, the call returns the (artificial) reference @(void), which can be ignored.

Some may prefer to code this call thus:

which documents the programmer’s understanding that this is a void method, and fails if it isn’t.

If the JRef argument represents a class, then the named static method of that class is called.

The jpl_get/3 API predicate has the following interface:

and can retrieve the value of an instance field e.g.

which binds the Prolog variable Pink to a reference to the predefined java.awt.Color “constant” which is held in the static final .pink field of the java.awt.Color class.

Object and class fields can be set (i.e. have values or references assigned to them) by the jpl_set/3 API procedure, which has the following interface:

where Datum must be a value or reference of a type suitable for assignment to the named field of the class or object.

builds an array of arrays of strings containing the names and values of the current SWI-Prolog “flags”, and displays it in a JTable within a ScrollPane within a JFrame: 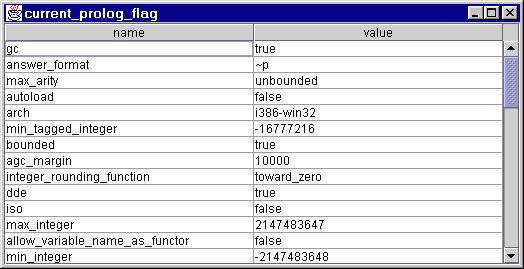 In addition to JPL API calls, this example calls jpl_datums_to_array/2, a utility which converts any list of valid representations of Java values (or objects) into a new Java array, whose base type is the most specialised type of which all list members are instances, and which is defined thus:

Having found the “most specific common ancestor type”, a new array of this type is created, whose elements are initialised to the successive members of the list of datums.

This illustrates another mode of operation of jpl_new/3:

Don’t overlook the possibility and advantages of writing custom Java classes to serve your Prolog applications: this interface is not designed to make Java programming redundant.

Uncaught exceptions thrown by the JVM while handling a Prolog API call are mapped onto error(_,_) structures, e.g.

because, as the exception suggests, yesterday is not a valid constructor argument.

Java exceptions are always returned as Prolog exceptions with this structure:

Although, in Java source code, static nested classes are named with the dot notation, e.g.

which you may have noticed in the name of the corresponding class file:

Unfortunately it is far from trivial to support the Java naming in JPL. Thanks go to Timo Baumann and Sebastian Godelet for their input on this issue.

If you need to create an instance of a non-static member class, you must explicitly pass (a reference to) an instance of its parent class as an additional (first) argument of any of its constructors. Java source syntax hides this, but reflection shows that every constructor (implicit or explicit) has this extra argument.

where X is bound to the nominated enum constant (actually an object reference), then passed as an arg to legend/1

You must pass an empty parameter list when calling Java methods which take no parameters, e.g.

There is (deliberately) no jpl_call/3 convenience predicate which defaults parameters to [] (see below).

You must accept an @(void) result when calling void Java methods, e.g. either

which explicitly matches the expected result, or

which uses an anonymous variable to ignore the result.

There is (deliberately) no jpl_call/3 convenience predicate which conceals the return value of void methods (see above).

will terminate the SWI-Prolog process (into which the JVM library has been dynamically loaded) without calling any at_halt/1 or PL_at_halt() hooks, or performing system cleanup actions. Beware also of calling Java classes which might call java.lang.System#exit().

Here are a few longer-term (and tricky) aims: